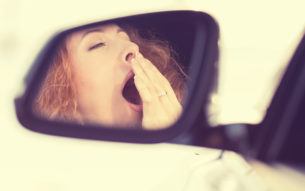 According to a survey by the National Sleep Foundation, 60% of adult drivers – about 168 million people – reported driving while drowsy in the past year, and nearly 40% reported actually falling asleep behind the wheel.

As Fatal as Drinking and Driving

The National Sleep Foundation reports that being awake for 18 hours equates to a blood alcohol concentration of 0.08% — legally drunk. Like alcohol, sleepiness delays reaction time, impairs awareness and judgement, and increases the risk of an accident.

Unlike alcohol-related crashes, it’s difficult to determine whether drowsiness is to blame. Despite that difficulty, several states are considering legislation that would allow law enforcement to charge drivers with criminal negligence if they injure or kill someone while driving without adequate sleep.

The best form of prevention is getting enough sleep and recognizing signs of driver fatigue. Drivers should stop and rest if they experience:

Or send it directly to someone via our email form: